Once upon a time, there were witches… In this classic re-mix, the silent film Haxan is wed in an unholy matrimony to the laconic snarl of William S. Burroughs narrative aplomb. Here’s what the Wiki has to say:

Häxan (English title: The Witches or Witchcraft Through The Ages) is a 1922 Swedish/Danish silent film written and directed by Benjamin Christensen. Based partly on Christensen’s study of the Malleus Maleficarum, a 15th century German guide for inquisitors, Häxan is a study of how superstition and the misunderstanding of diseases and mental illness could lead to the hysteria of the witch-hunts.[1] The film was made as a documentary but contains dramatized sequences that are comparable to horror films. With Christensen’s meticulous recreation of medieval scenes and the lengthy production period, the film was the most expensive Scandinavian silent film ever made, costing nearly two million Swedish krona.[1] Although it won acclaim in Denmark and Sweden, the film was banned in the United States and heavily censored in other countries for what were considered at that time graphic depictions of torture, nudity, and sexual perversion.[2]

In 1968, an abbreviated version of the film (77 minutes as opposed to the original’s 104 minutes) was released, entitled Witchcraft Through The Ages. This version featured an eclectic jazz score by Daniel Humair (played by a quintet including Jean-Luc Ponty on violin and Daniel Humair on percussion) and dramatic narration by William S. Burroughs.[4] 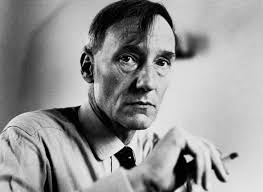 For a special treat this Halloween, please enjoy Witchcraft Through the Ages with your all-too-willing-guide, William S. Burroughs, courtesy of our YouTube Channel.

For those of you with a big appetite, we’ve got a special sweet hidden away. Check out this great little recitation of Poe’s “The Red Death” also read by William S. Burroughs.

Happy Halloween everybody! Thanks for reading. Be safe. Be scary!

The new Criterion Collection release features the original film as well as the William S. Burroughs cult classic. Buy it today and keep this site undead…

Listen to two of my CD’s – Blue Turns Black and Plain Jane! Download your free songs, stream both discs and find both projects at your favorite digital music shop.